For natural gas report week October 22, 2020, the EIA reported a net increase in storage of 49 Bcf. The build was in line with forecasts of injections ranging from 44 Bcf to 68 Bcf, averaging 50 Bcf. Last year for the same week there was an injection of 92 Bcf and the five-year average is 75 Bcf. 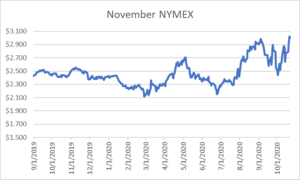 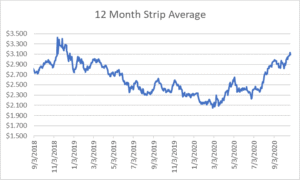 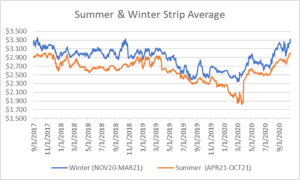 LNG pipeline receipts are up by 1.2 Bcf/d. Fourteen LNG vessels with a combined carrying capacity of 51 Bcf departed the U.S. between October 15 and October 21, 2020.

The number of rigs in operation increased by six, up to 329 according to data from Enverus. Baker Hughes rig data shows natural gas specific rigs increased by one from last week, up to 74.

Overall spot price activity was mixed on cooler temperatures throughout the Midwest and seasonal temperatures covering the rest of the country. Of note, Henry Hub spot prices increased 83 cents from last Wednesday ($2.03/MMBtu to a high of $2.86/MMBtu on the 21st). Additionally, Permian Basin Waha Hub prices averaged $0.89/MMBtu on Wednesday after hitting a low of -$0.32/MMBtu on Friday.

Prices are tied to temperature and storage/production fundamentals. Even though we’re on track to end withdrawal season at a surplus to the five-year average, production has and will continued to remain well below 2019 totals until the middle of 2021. Declining production, even with normal winter temperatures, generally proves bullish the closer we are to winter. Confidence that production will rebound as expected is seen in Cal ’22 – Cal ’24 prices.

It doesn’t seem possible that November is right around the corner – especially with regional temperatures in the 70s today. If you require convincing, a look at next week’s forecasts should do the trick.

With NOAA winter weather projections forecasting above-average temperatures for much of the southern U.S. and cooler weather for the North, the EIA estimates residential-commercial (rescom) natural gas consumption will exceed last year’s totals. This is due, in part, to expectations for a modest increase in heating degree days from 572 last year to 602 this year. Continued COVID-19 control efforts are also anticipated to drive rescom consumption. According to EIA winter natural gas demand forecasts, “Despite lower prices, EIA forecasts higher residential natural gas consumption will lead to an increase in household expenditures for homes that primarily heat with natural gas. EIA forecasts average household expenditures for these homes will rise to $572 this winter, an increase of $32 (5.9%) compared with last winter.”