For natural gas report week October 1, 2020, the EIA reported a net increase in storage of 76 Bcf. The build was in line with forecasts of injections ranging from 71 Bcf to 86 Bcf, averaging 77 Bcf. Last year for the same week there was an injection of 109 Bcf and the five-year average is 78 Bcf. 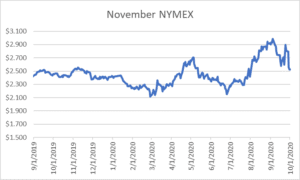 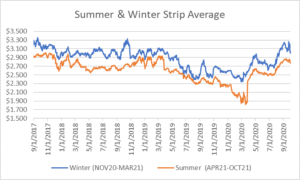 Total demand grew by 0.4% from the prior report week, averaging 79.3 Bcf/d. Consumption for power generation grew by 3.8% while residential-commercial demand fell by 7.5%.  Industrial demand and exports to Mexico fell by 0.5% and 1.5% respectively.

LNG pipeline receipts are up by 0.45 Bcf/d. Fourteen LNG vessels with a combined carrying capacity of 50 Bcf departed the U.S. between September 24 and September 30, 2020.

The number of rigs in operation increased by twenty, up to 317 according to data from Enverus. Baker Hughes rig data shows natural gas specific rigs increased by two from last week, up to 75.

November became the prompt month, closing the books on a volatile October. Marked by an 82-cent trading range amid COVID demand recovery, investor driven cuts to productions, and a stabilizing economy, analysts have turned their attention to the approach of winter heating season.

Although the last week brought cool temperatures to punctuate the end of summer, the NOAA 8-14 day forecast predicts above-average temperatures for the entire country. At the same time, well counts increased again this week, signaling an intention to ramp up production.

The warmer weather combined with increasing production will increase the likelihood that injection season will conclude at a healthy surplus to the five-year average. Will this subdue the price volatility experienced in October? As winter-weather forecasts and LNG export opportunities become more defined, market response will follow.

This Wednesday the EIA released their natural gas annual for 2019. Some interesting highlights include:

Read the rest of the EIA Natural Gas Annual 2019.