For natural gas report week, April 8, 2020, the EIA reported a net increase in storage of 38 Bcf, exceeding forecasts of injections ranging from 15 Bcf to 33 Bcf. Last year for the same week there was an injection of 25 Bcf and the five-year average is an injection of 6 Bcf. 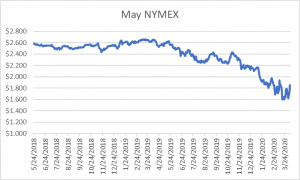 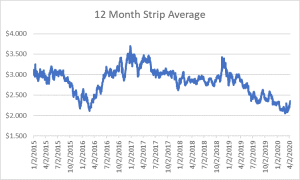 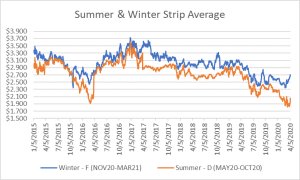 Prompt month prices fell in response to this week’s bearish EIA storage report which came in well above last year’s injection and the five-year average. The drop follows a week of gains prompted by possible production cuts. Even though production fell by 1.5 Bcf/d by midweek, it’s still up more than 2.5 Bcf/d over last year. Demand remained steady from last week. The slight increase in power burn was offset by a drop in residential-commercial consumption due to warmer weather across the report week. That trend is expected to reverse as below-normal temperatures are expected for the next two weeks. Declining production and lower temperatures will likely yield bullish storage numbers through the end of April. That may give prompt month prices some support.

A recent report by Forbes indicates higher natural gas prices are likely by the end of 2020. “American producers’ response to low crude prices, including shutting in uneconomic wells and slashing drilling capital budgets by 30 percent and even 50 percent, will have a dramatic effect on domestic natural gas output as well as oil. Roughly 40 percent of U.S. gas production is so-called ‘associated gas,’ a byproduct of drilling for oil.” With expectations for natural gas production cuts by as much as 6 Bcf/d, gas markets could “go from being long during the summer months to being very short by the winter of 2020-2021.” Analysts suggest natural gas
prices could double by winter. This would stabilize America’s oil and gas industry which supports 4.5 million jobs for independent producers alone.

The currently backwardated market hints at the credibility of this forecast with 2021 calendar strips outpricing 2023. With a tentative ceasefire called in the Saudi-Russia oil war, the reduction of 20 million barrels of oil per day will alleviate immediate storage concerns. Nonetheless, the drop is unlikely to provide significant help for a heavily oversupplied market amid obliterated demand. To this end, production cuts are expected to continue.

Drastic Declines in Electricity Demand a Harbinger of Recession?

The New York Times examined the correlation between declines in electricity consumption and economic downturn. They asserted, “New data on electricity use in the past three weeks suggest a sharp decline in U.S. economic activity on par with that of the Great Recession. It may already be the deepest downturn since the Great Depression; it is certainly the fastest.” While the comparison is, in part, informed by history, recent history hasn’t experienced anything like the current pandemic. You can read the entire article here.