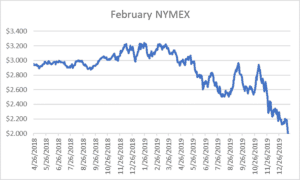 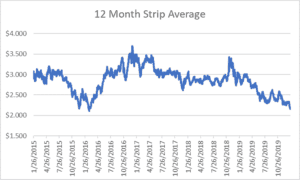 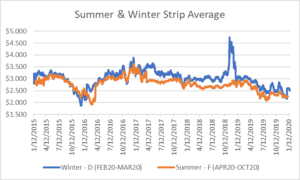 Overall supply grew by 1% from last week. Average net imports from Canada increased by 62% in response to higher heating-related demand during the first half of the week, specifically in the Northeast and Midwest. The weather drove consumption up by 17% with residential/commercial up by 27% and power generation up by 15%. Industrial demand rose 3% while exports to Mexico fell by 7%. So far this withdrawal season, the average rate of withdrawal is 22% less than the five-year average. If the rate of withdrawal from storage matched the five-year average of 13.5 Bcf/d from now until March 31, storage inventory would be 1,948 Bcf which is 251 Bcf higher than the five-year average of 1,697 Bcf.

It was really just a matter of time. Prompt month prices broke the $2 mark this week, largely in response to excess supply and forecasts signaling warmer temperatures for the next two weeks. It’s good news for those of us who aren’t fans of winter and others who have been waiting to see how low natural gas prices can go. Not in either group? Not to worry, NOAA is also predicting above-average snowfall and average temperatures for February and March…at least in the Midwest.