For natural gas report week, January 30, 2020, the EIA reported a net decrease in storage of 201 Bcf, in line with projections ranging from a withdrawal of 180 Bcf to a draw of 225 Bcf. Last year for the same week there was a withdrawal of 171 Bcf and the five-year average is a withdrawal of 143 Bcf. 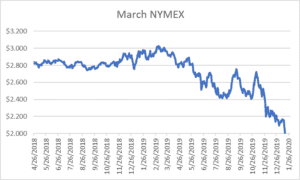 February moved off the board Wednesday, January 29th, settling the month at $1.877/Dth. 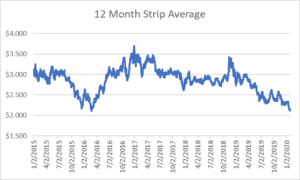 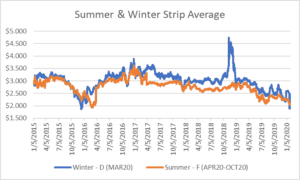 Overall supply fell by 1% from last week with production remaining steady and average net imports from Canada decreasing by 9 Bcf. Total demand dropped by 10% from the prior report week with residential/commercial down 15% and power generation slipping by 6%. Industrial demand fell by 3% while exports to Mexico grew by 13%.

Throughout January, temperatures averaged 5 degrees more than normal for this time of year with some locations in Ohio and New York reaching as much as 10 degrees above average. This contributed to a 7.1 Bcf/d decline in heating-related demand over last year at this time. It’s also had a chilling effect on prices with February’s settle and the calendar strips setting new low records.

Looking forward to the final month in winter trading, it will likely be more of the same as mild temperatures continue to depress demand, and consequently, prices. If the market is to experience a ninth-inning rally, it will need some help from production cuts. While many major natural gas producers have announced plans to reduce drilling, production rates still exceed last year at this time. It’s possible that any declines might be too little, too late.

Last week, Ohioans Against Corporate Bailouts, the group fighting the legislation subsidizing FirstEnergy Solutions, dropped their appeal seeking more time to collect the signatures necessary to put the measure up for vote on the November ballot. As reported by Cleveland.com, Gene Pierce, a spokesman for the group stated, “’We couldn’t see a path forward. I don’t know what anybody else wants to do, but we’re done.’”

With that fight effectively over, ratepayers must now turn their attention to HB247 which may have more far-reaching consequences than HB6. Stay tuned for more details on HB247 in upcoming reports.