For natural gas report week, June 25, 2020, the EIA reported a net increase in storage of 120 Bcf. The build exceeded forecasts of injections ranging from 99 Bcf to 116 Bcf, averaging 111 Bcf. Last year for the same week there was an injection of 103 Bcf and the five-year average is 73 Bcf. 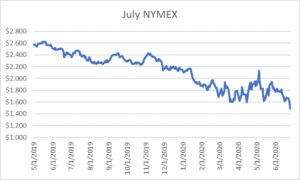 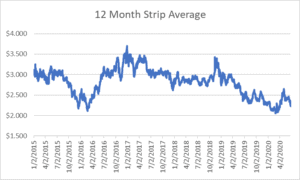 Overall supply averaged 92.6 Bcf/d last week as imports from Canada increased by 13.0% while production fell by 0.3%.

Total demand grew by 9.8% from the prior report week, averaging 80.7 Bcf/d. Consumption for power generation increased by 20.5%. Likewise, exports to Mexico grew 6.4%. Residential-commercial consumption dropped by 0.1% and industrial demand fell by 1.0% from last week. LNG exports decreased by one LNG vessel to seven with a combined carrying capacity of 25 Bcf.

The number of rigs in operation fell by 6 to 294 according to data from Enverus.

According to analysis from the EIA, low feedgas volumes delivered to LNG export terminals in have put downward pressure on natural gas prices. Also, COVID-related decreases in business and manufacturing activity have led to weaker demand. “Estimates from S&P Global Platts suggest that average industrial natural gas consumption in June 2020 has declined about 2.1 Bcf/d, or 9.6%, compared to June 2019.”

So far this summer, low prices have led to increased consumption for power generation because prices are more competitive than other fuel sources such as coal. June average daily power burn is up about 6% compared to last year, despite no demand growth for electricity.

Additionally, low prices have led to cuts in production. Further production declines are expected as a result of lags between price changes and production adjustments.

On Tuesday, TETCO declared a force majeure on its entire 30-inch diameter pipeline spanning from Uniontown, Pennsylvania, to Kosciusko, Mississippi. The force majeure could reduce throughput capacity at Uniontown from 4.2 Bcf/d to 2.5 Bcf/d, according to estimates from Genscape.