For natural gas report week September 17, 2020, the EIA reported a net increase in storage of 89 Bcf. The build exceeded forecasts of injections ranging from 68 Bcf to 86 Bcf, averaging 80 Bcf. Last year for the same week there was an injection of 82 Bcf and the five-year average is 77 Bcf. 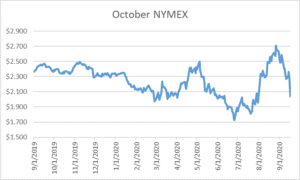 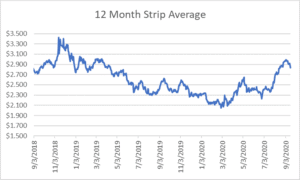 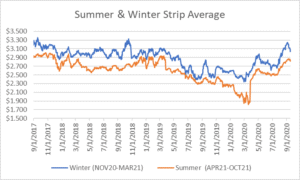 Total demand fell by 3.0% from the prior report week, averaging 81.1 Bcf/d. Power generation and exports to Mexico declined by 6.3% and 5.7%, respectively.  Industrial demand grew by 0.4% and residential-commercial increased by 2.7%.

LNG pipeline receipts are up by 2.4 Bcf/d, averaging 7.0 Bcf/d. Eleven LNG vessels with a combined carrying capacity of 41 Bcf departed the U.S. between September 10 and September 16, 2020.

The number of rigs in operation grew by five, up to 294 according to data from Enverus. Baker Hughes rig data shows natural gas specific rigs decreased by one from last week, down to 71.

Although prices fell across the board, it was most pronounced in spot and prompt month prices as well as in the upcoming winter strip as cooler weather led to decreased demand.

According to the EIA, temperatures averaged 65–70 degrees across most of the Lower 48 states, leading to lower consumption for power generation. Additionally, this week’s injection of 89 Bcf exceeded both last year’s injection and the five-year average as well as market expectations. The injection appears to have been the primary factor in the price drop, particularly for prompt month prices, as most of the decline occurred within the hour following the EIA’s publication of weekly storage numbers.

Can We Talk Risk?

But in a year that’s brought us a global pandemic, global lockdowns and natural gas demand destruction, negative oil prices, murder hornets, record breaking wildfires, and fire tornadoes, if one thing should be clear, it’s that not much is really all that certain.

Energy prices aren’t immune to turbulent current events. Read on for more about how to understand price risk in light of such uncertainty.