For natural gas report week, May 14, 2020, the EIA reported a net increase in storage of 103 Bcf. The injection was in line with forecasts of injections ranging from 93 Bcf to 115 Bcf. Last year for the same week there was an injection of 100 Bcf and the five-year average is an injection of 85 Bcf. 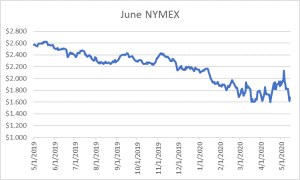 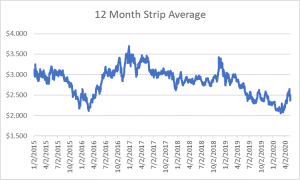 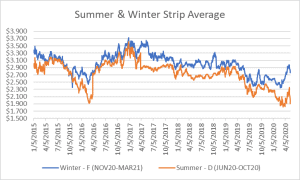 Overall supply averaged 96.0 Bcf/d last week as imports from Canada increased by 17.3% and production increased by 0.2%.

Flow from the Appalachia Basin remains restricted following the May 4th Enbridge-TETCO pipeline explosion. While 0.9 Bcf/d of the line’s 1.3 Bcf/d capacity has been rerouted, the line won’t return to service for the next two to three weeks.

According to an Enbridge critical notice posted May 8th, “TE is in the process of evaluating options to restore partial capacity. TE will address all of the site-specific concerns identified by the National Transportation Board (so NTSB) and the Pipeline & Hazardous Materials Safety Administration (PHMSA) and will be undertaking rigorous inspections on all of the lines in the area. At this time, TE anticipates it will continue to restrict to zero, for a minimum of, an additional two to three weeks from today. These pipelines will not be returned to service until we satisfy regulatory requirements and it is safe to do so. Furthermore, NTSB has assumed control of the incident site. The NTSB and PHMSA are investigating the incident and Texas Eastern is supporting that investigation.”

The TETCO pipeline is over 9,000 miles long and runs from the United States-Mexico border to New York City. It supplies natural gas to electric generation facilities in high-demand markets in the northeastern United States. The Appalachia Region system is composed of thee lines – Line 10, Line 15, and Line 25. Last week’s explosion occurred on Line 10 of its 30-inch pipeline system just north of the Owingsville, Kentucky Compressor Station.

Other Recent TETCO Issues in the Region

A rupture on a segment of Line 10 in Berne, Ohio in January 2019 returned to full service after ten weeks.

In August 2019, an explosion on Line 15 occurred in Danville, Kentucky which is just upstream from last week’s location. Following the August explosion, PHMSA issued a ‘corrective action order’ that required TETCO to “keep Line 15, where the explosion occurred, and Lines 10 and 25 (located next to Line 15), offline…indefinitely.” Line 25 returned to service almost a month after the Line 15 explosion and Line 15 is still out of service, nearly a year later. Genscape expects that “…Line 15 and possibly Line 25 will be excavated and checked for external damage. Internal damage will be checked with in-line tools prior to returning to service.”