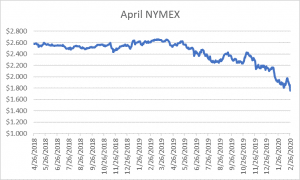 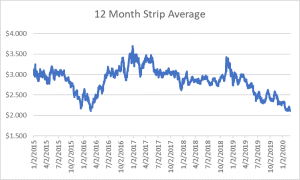 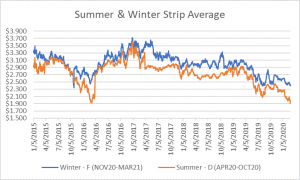 Overall supply averaged 100.0 Bcf/d last week with production unchanged and average net imports from Canada down by 7%. Despite week-over-week numbers showing production has been consistently flat, it’s up 5.1 Bcf/day over last year has and averaged 91.5 Bcf/d so far this month. Total demand dropped by 4% from the prior report week with residential/commercial consumption and power-generation down by 8% and 3%, respectively. Industrial consumption grew by 2% while exports to Mexico remained the same at 5.4 Bcf/d week-over-week.

More than 83,000 cases of coronavirus have been confirmed in more than 50 countries as global disruption to businesses and economies has impacted American markets throughout the last week.

Natural gas markets have not been immune to the impact as China National Offshore Oil Corp. (CNOOC), China’s largest LNG importer suspended contracts with suppliers and made a legal move to nullify other contractual obligations, leaving many shipping vessels afloat while they search for other buyers.

Chevron sent home 300 workers in London over coronavirus fears when an employee returned to work following a trip to Italy and began feeling ill. Other companies have also furloughed employees which may disrupt natural gas supply and demand.

Amid declining demand, oil prices are notably lower at $45 a barrel. The NYT reports that’s the break-even price for many producers who don’t yet have immediate plans to curtail drilling, a move that would translate to reduced associated natural gas production.

As the trading calendar flips to April 2020, the first month of the diminishing summer strip, there’s an awareness that the time for winter’s last hurrah for this withdrawal season is at hand. This was reaffirmed by forecasts predicting temperatures in excess of the ten-year norm for the majority of the country.

Haven’t cleared the driveway from this week’s snow? Not to worry, cities from Chicago to Baltimore will see temperatures in the 50s and 60s next week. While that might help clear your walkway, it’s certainly no help when it comes to natural gas prices which fell uniformly across the report week. Spot, prompt month, calendar, and seasonal strip prices all declined across the report week. By current circumstances, voluntary production declines are more likely to help prices than other fundamentals.