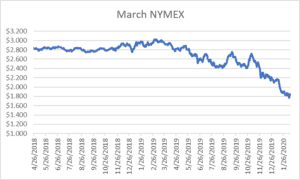 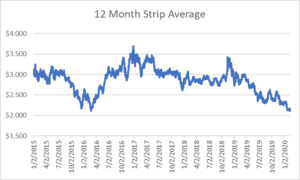 Settled Thursday at $2.152/Dth, down less than a penny from last Thursday. 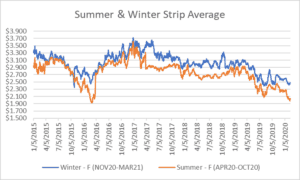 Overall supply averaged 99.8 Bcf/d last week with production remaining steady and average net imports from Canada increasing by 2%. Despite week-over-week numbers showing production has been consistently flat, it’s up 5.1 Bcf/day over last year has and averaged 92.0 Bcf/d so far this month.

In 2017, the outlook for LNG exports was promising. The United States had become a net exporter of natural gas and subsequently doubled prior-year totals in 2018 and 2019. Completed pipeline projects added to capacity and robust demand was expected to absorb some excess supply. However, the above-average winter temperatures much of the United States has experienced has been the same story for a large portion of the northern hemisphere which is composed of countries that likewise entered heating season with healthy supply levels. And so the supply glut has become a global issue, leading to low prices in nearly all foreign markets. For U.S. exporters, that could mean prices that make the cost of shipping unprofitable. Declining Asian demand in the wake of the coronavirus may compound the problem. For now, the issue hasn’t led to contract cancellations or requested re-negotiations for most exporters. With contracts scheduled months out, there’s optimism the extra supply won’t further bloat the domestic market in the immediate future. Nonetheless, this remains one to watch.

Spot prices generally rose in most locations across the report week in response to short-term forecasts for cooler temperatures. On Monday, March trading settled at $1.766/Dth – the lowest finish since March 2016. While prompt month prices recovered nearly 8 cents by Wednesday, they’ve lost almost 16% so far this year according to MarketWatch. With major natural gas producers showing signs of financial trouble, pressure from investors and economic natural selection (in the form of bankruptcies) will likely prompt declines in production. As the supply-demand balance tightens, expect prices to rebound. The 2023 and 2024 calendar strips show evidence of market confidence in this scenario.