For natural gas report week, April 30, 2020, the EIA reported a net increase in storage of 70 Bcf, in line with forecasts of injections ranging from 64 Bcf to 82 Bcf and averaging 71 Bcf. Last year for the same week there was an injection of 114 Bcf and the five-year average is an injection of 74 Bcf. 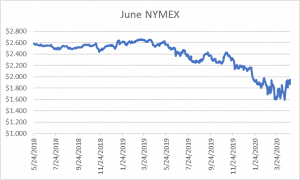 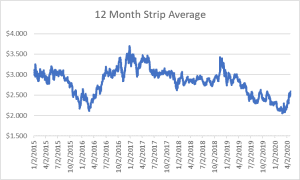 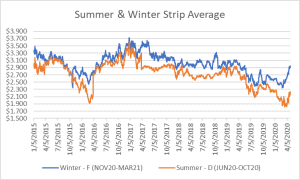 Overall supply averaged 96.6 Bcf/d last week as production declined by 0.5% and average net imports from Canada decreased by 12%. Total demand fell by 3.8% from the prior report week with both industrial consumption and power generation down 1.1% and 1.9%, respectively. Residential-commercial consumption also declined by 8.5%, averaging 20.1 Bcf/d. Exports to Mexico increased by 2.7% while LNG exports decreased from last week, down 2 LNG vessels to 11 with a combined carrying capacity of 39 Bcf. The daily rig count fell by 38 from last week, down 11.0% to 415. Natural gas specific rigs fell to 85 on April 21, the lowest number since August 2016.

Last week, the PUCO reported Ohio weather-normalized electricity consumption is 11% below the 5-year average. Elsewhere, “Full lockdowns have pushed down electricity demand by 20% or more, with lesser impacts from partial lockdowns. Electricity demand is set to decline by 5% in 2020, the largest drop since the Great Depression in the 1930s,” according to a new report by the IEA.

Well closures prompted by historically low oil prices mean less associated gas production. Some analysts believe the reduction may reach as much as 40%. The Wall Street Journal reported, “When crude prices dipped below $0, natural gas prices had their best day in more than a year, popping 9.75% on the prospect that many money-losing wells will be capped. Hedge funds and other speculators last week were net long—with more wagers on rising gas prices than bets counting on decline—for the first time since last May, according to Commodity Futures Trading Commission data.”

“Natural gas futures for June delivery closed up 4.3% to $1.949 per million British thermal units Thursday. On Friday it climbed to $2.016 in early trading before falling back. That’s still too low for many gas wells to be profitable. But it’s up 30% from the 25-year-low of $1.552 on April 2 and the trend is higher heading into summer, when there’s demand to power air conditioners, and more so in winter, when a lot of gas is burned for heat. Futures for July delivery reached $2.25 Friday. December gas nosed above $3.”